Have you ever wondered what it would be like to travel like an all-star? Or at least, alongside your favorite? Private jets, VIP transfers and fine dining make for a glamorous trip, but these logistics need to be carefully crafted and executed. Cue our specialists at BCD M&E, masterminds in organizing sports team travel.

In this article, John Kelly, BCD M&E Marketing Director, EMEA and avid football (or soccer) fan, takes us on a behind-the-scenes tour of the ultimate work perk-traveling with one of his favorite teams and top client of BCD M&E. Here is John's first-hand account of the inner-workings of sports team travel with one of Europe's most popular soccer clubs. 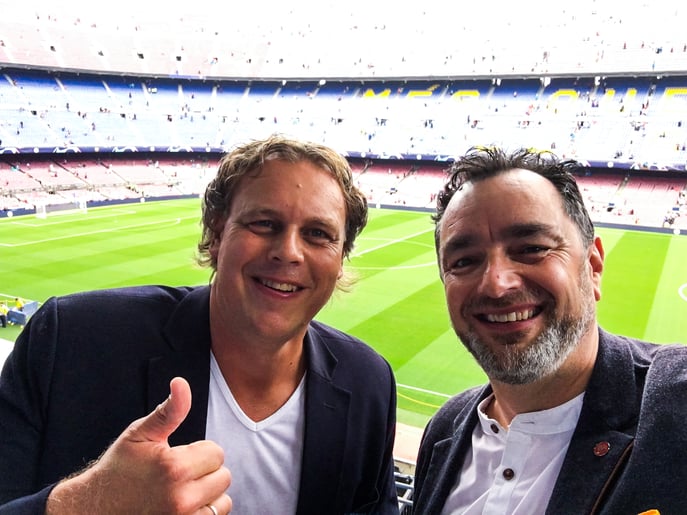 "...moving a big group of VIPs like this is no easy task. These guys are some of Europe’s finest footballing talent so it’s important that their every need is catered for."

First things first, I have to admit that I am a big football fan (soccer to all of you in the U.S.). I can get excited about games that sit way below the top leagues and it’s not unusual for me to sit in a park and watch a local amateur team play. When my colleague Peter Bregman, Country Director for the Netherlands, invited me to join him on a trip to see PSV Eindhoven to play the mighty FC Barcelona in the Champions League and see for myself the logistics behind the scenes, I simply felt that it was my duty to come along and experience it for myself.

At BCD M&E, we're sponsors of PSV and look after the logistics of their travel and accommodation for away games so going to see them play against Barcelona in the Champions League was a big deal, especially as it was the first time they would be playing each other in the competition. To have the chance to travel within their “bubble” was a thrill for me, and I couldn’t wait.

PSV had been riding high at the top of the Dutch League during this time so their movements throughout the region were noteworthy. That became evident when I arrived at Eindhoven airport where BCD M&E’s group reservation team was already set-up and awaiting the team. What was less obvious were the groups of fans surreptitiously waiting around for the team to arrive. It was imperceptible at first—the low buzz, excited kids and adults trying to be discreet in taking photos. Then the selfies began, and the players all politely agreed which is the norm for them. It was fantastic to see. Former players are also part of the “bubble” and all are greeted warmly by the coaches and staff—after all, you never truly lose the legendary status. I also found that they’re the most down to earth, as they’ve done the star treatment for so long that it’s second nature and for them and nothing to get too excited about. 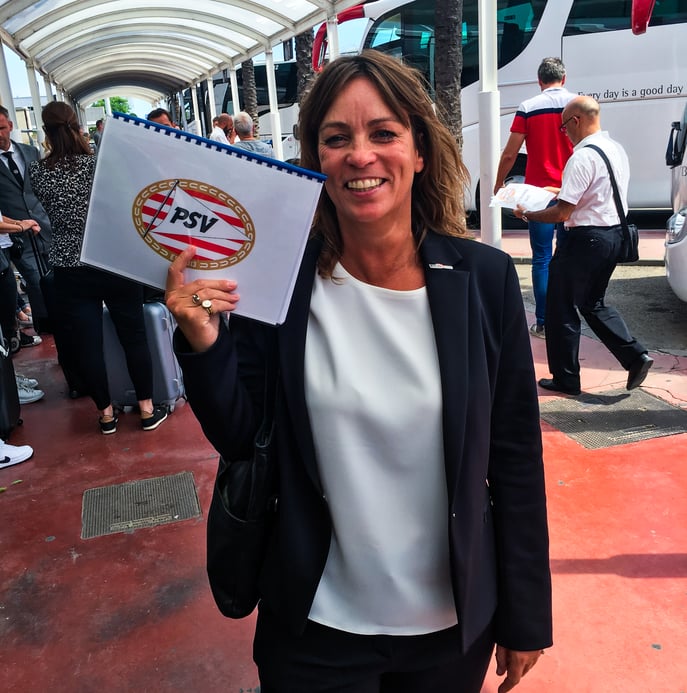 On-site, Inge Borghart, waits to greet the team at the Barcelona airport.

What I experienced firsthand is that moving a big group of VIPs like this is no easy task. These guys are some of Europe’s finest footballing talent so it’s important that their every need is catered for. There are a thousand variables that need to be planned and accounted for, wherever possible having a Plan B, C or D, just in case! It’s not just the players needs that need to be addressed, but also sponsors, family, press, media, youth squad and fans who have bought packages to attend the game. And, it’s not just humans that need a VIP treatment. The kit and equipment needed for the game needs to travel as well. In fact, it goes out the day before to ensure it arrives safely—no detail is left to chance.

Once on the ground in Barcelona, the BCD M&E crew was in full swing. Executive coaches were assigned for the travelling masses as well as the first team who headed off separately for pre-match training. It’s an extremely slick operation and we were out of the airport and into the city with minimum fuss. At the hotel, we made our way to a dedicated check-in area and everyone had their room key within minutes of arrival. However, there’s very little downtime as an impressive array of activities has been scheduled for the sponsors and their families. First up is a cocktail reception at the hotel where everyone can network, talk about the game and receive special gifts to commemorate the event.

That night, we were whisked away to a posh restaurant rented out exclusively for our group, where we got to meet and mingle with more of the ex-players. There were lot of laughs hearing stories from around the footballing world. To be honest, that would have been enough for me, but we still had the game the next day so it was back to the hotel for a good night’s sleep.

The next day was slightly more slow-paced. We attended a briefing from one of the coaches on the tactics that we would see in the game. Unfortunately, it was in Dutch so I have no idea what was said or if it would make a difference that night. Afterwards was lunch at a Spanish Tapas restaurant before we went to see the Under-19’s play against their counterparts from Barcelona. What an excellent match it was! PSV were unlucky to be beaten 2-1 after a great display, but it certainly added some positivity toward that night’s game.

There’s this footballer called Lionel Messi, and it turns out he’s really rather good at the game. He may have scored a hattrick, and the result may have been 4 nil to Barcelona. But, that didn’t spoil it too much for me as something of a neutral. Of course, our guests weren’t too happy, though the after-game reception at a local craft-brewery helped ease some of the upset. 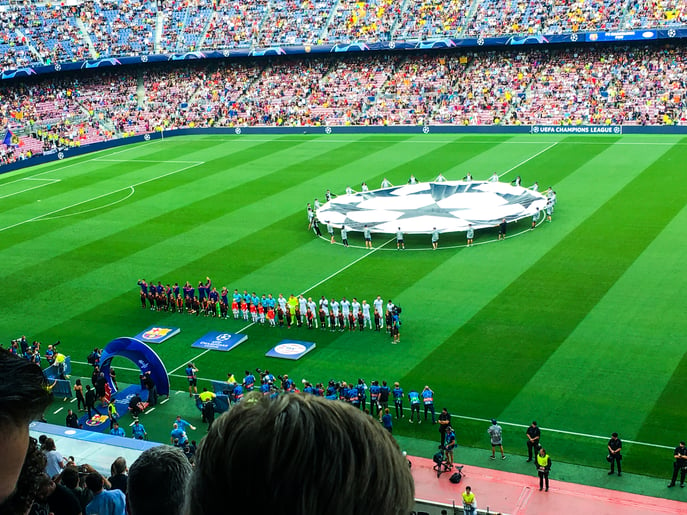 The post-game wrap up

As something of an outsider, it was interesting to watch how things unfold onsite. Our BCD M&E team was utterly professional throughout and everyone within the PSV organization knew them. Absolutely no detail was left to chance, and it showed throughout the trip. Whether it was the private air charter for team and sponsors, the check-in procedures, the ground programme or menus chosen—everything was spot-on, and it was a joy to be just a small part of it.

However, all too soon it’s over. I needed to get back to London so I travelled back without the team and other sponsors which was a harsh feeling! Nobody opened a velvet rope to let me in; I had to queue to get coffee; and, I didn’t feel quite as special anymore.

It was an amazing few days where I was privy to the inner workings and logistics of our Sports service. I’ve seen first-hand how this world works and the incredible attention to detail that goes in to making sure the teams and supporters that we work with experience a seamless operation.

Meetings and events are back in a big way, bringing both triumphs and challenges; this can be...

This year has no doubt been one of continued ups and downs around the world with economic,... 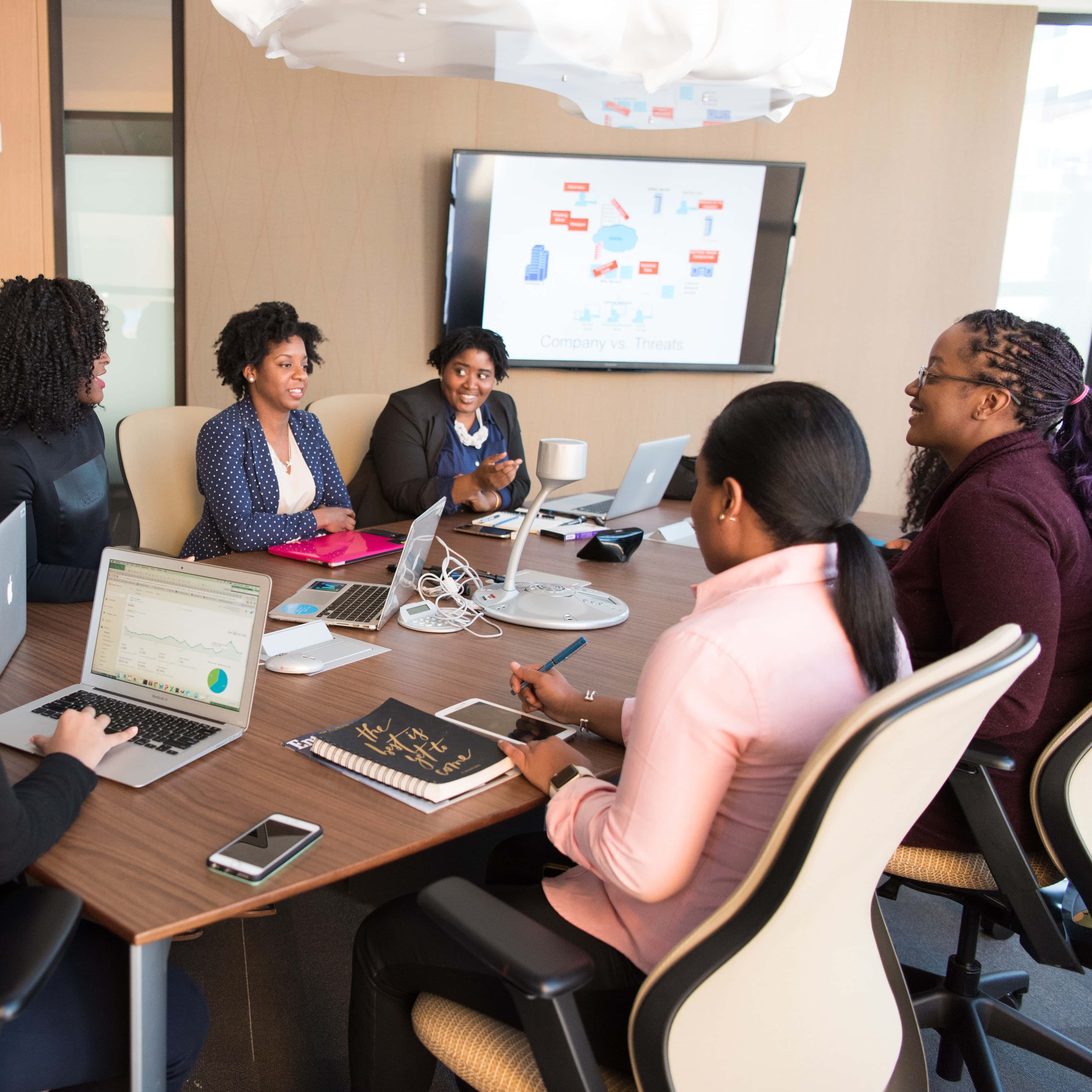 The team must work well together in every sport, but who looks after them when they're not working?...

The Importance of Performance Optimization in Meetings & Events
by Ingrid Bahr

Performance optimization - the important checks and balance system for almost any type of work. At...